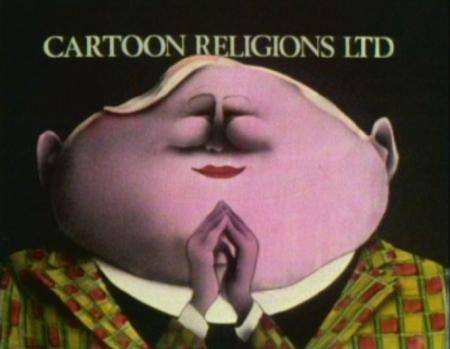 Crackpot: This is an example of the sort of abuse we get all the time from ignorant people. I inherited this religion from my father, an ex-used-car salesman and part-time window-box, and I am very proud to be in charge of the first religion with free gifts. You get this luxury tea-trolley with every new enrolment. (pictures of this and the subsequent gifts) In addition to this you can win a three-piece lounge suite, this luxury caravan, a weekend for two with Peter Bonetti and tonighes star prize, the entire Norwich City Council.

(Curtains go up to reveal the council. Terrific ‘ooh’ from an audience. Bad organ chords played by a nude man).

Crackpot: And remember with only eight scoring draws you can win a bishopric in a see of your own choice. You see we have a much more’ modern approach to religion.

(Cut to a person in church. They are walkning past a pillar. They take out some money and put it in a collecting box. A sign on the box says ‘For the rich’. We hear the money going in, then it moves off, along pipes, falling down; eventually it tomes down a small pipe and lands with a tinkle in Crackpot’s ashtray. Ht tries the money with his teeth, pops it into his pocket, and finishes reading…)

Crackpot: Blessed is Arthur Crackpot and all his subsidiaries Ltd. You see, in our Church we have a lot more fun.

Priest: (we see he has a peppeRPot with him) Oh, Mrs Collins, you did say you were nervious, didn’t you? You have eyes on the coffee machine?

Priest: (slaps her) Archdeacon! You asked for the coffee machine … so lets see what you’ve won? You chose Hymn no. 437. (goes to hymn board, removes one of the numbers, and reads what’s on the back) Oh, Mrs Collins, you had eyes on the coffee machine. Well you have won tonight’s star prize: the entire ‘Norwich City Council.

Mrs Collins: I’ve got one already. (the priest starts to throttle her)

(Cut back to Crackpot in his Office.)

Crackpot: A lot of religions – no names no pack drill – do go for the poorer type of person – face it, there’s more of ‘era – poor people, thieves, villains, poor people without no money at all – well we don’t have none of that tat. Rich people and crumpet over sixteen can enter free: upper middle class quite welcome; lower middle class not under five grand a year. Lower class – I can’t touch it. There’s no return on it, you see.

(Pull back to show interviewer sitting at his side.)

Interviewer: Do you have any difficulty converting people?

Crackpot: Oh no, well we have ways of making them join.

(Cut to a photo of a bishops)
(SUPERIMPOSED CAPTION: “THE BISHOP OF DULWICH’)

Crackpot’s Voice: Norman there does a lot of converting: a lot of protection, that son of thing. And there’s his mate, Bruce Beer.

(Photo of Aussie bishop with beer can)
SUPERIMPOSED CAPTION: (THE ARCHBISHOP OF AUSTRALIA’)

Crackpot’s Voice: Brucie has personally converted ninety-two people twenty-five inside the distance. Then again we’re not afraid to use more modern methods.

(Cut to ‘Daily Mirror’ type pin-up of a bikinied lovely in a silly pose, on a beach with a bishop’s mitre and Bible. A large headline reads: ‘North See Gas’. A subheading says ‘Bishop Sarah’, then below that, this blurb which is also read voice over.)

Voice Over: Sarah, today’s diocesan lovely is enough to make any chap. go down on his knees. This twenty-three-year-old bishop hails appropriately enough from Bishop’s Stortford and lists her hobbies as swimming, riding, and film producers. What a gas! Bet she’s no novice when it comes to converting all in her See.

(Cut to a bishop. A sign on the wall says ‘Naughty Religion ‘.)

Bishop: Our religion is the first Church to cater for the naughty type of person. If you’d like a bit of 1ove-your-neighbour – and who doesn’t now and again – then see Vera and Ciceley during the hymns.

Bill: In our Church we try to help people to help themselves – to cars, washing machines, lead piping, no questions asked. We are the only Church, apart from the Baptists, to do re-spray jobs.

(Cut to loony with a fright wig and an axe in his head. A sign says: ‘The Lunatic Religion ‘.)

Ali Byan: We the Church of. the Divine Loony believe in the power of prayer to turn the head purple ha, ha, ha.

(Cut to a normal looking priest. A sign says: ‘The Most Popular Religion Led’.)

Priest: I would like to come in here for a moment if I may, and disassociate our Church from these frivolous and offensive religions. We are primarily concerned with what is best… (phone rings; he arewets it) Hello. Oh, well how about Allied Breweries? All ri’ght. but keep the Rio Tinto (puts phone down) … for the human soul. 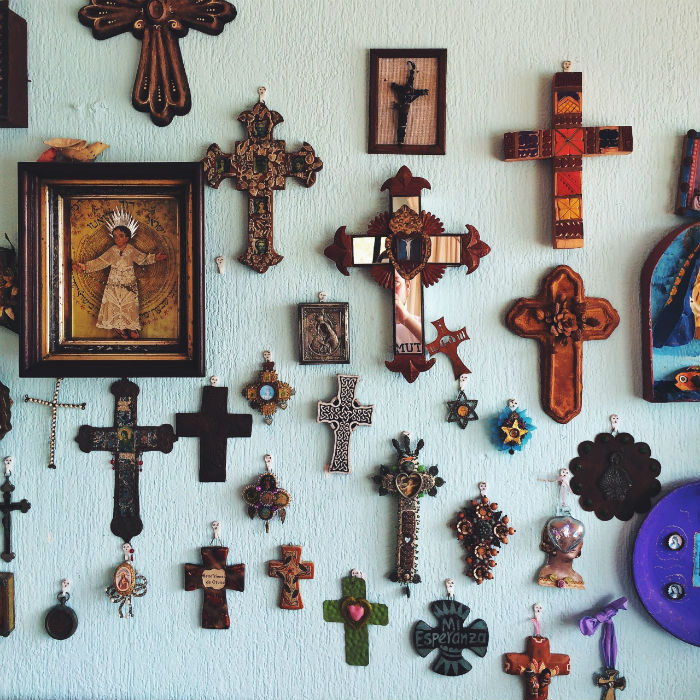